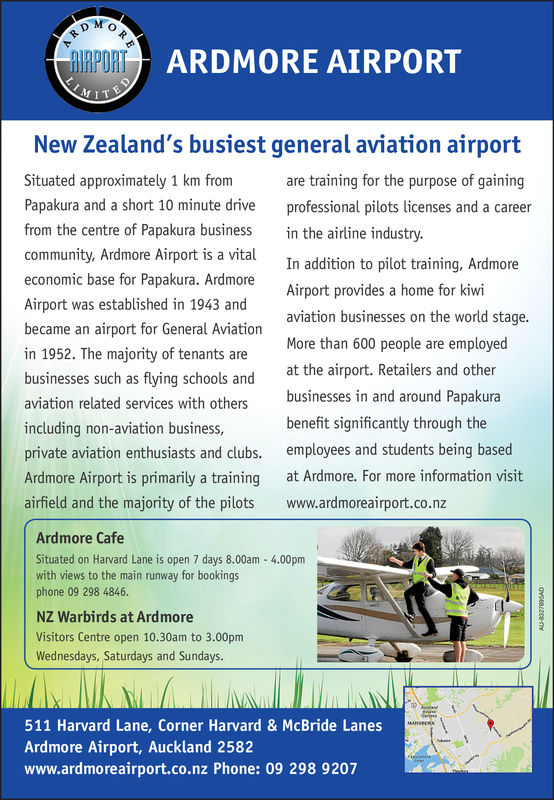 ARDMORE AIRPORT New Zealand's busiest general aviation airport Situated approximately 1 km from are training for the purpose of gaining Papakura and a short 10 minute drive professional pilots licenses and a career from the centre of Papakura business in the airline industry. community, Ardmore Airport is a vital In addition to pilot training, Ardmore economic base for Papakura. Ardmore Airport was established in 1943 and became an airport for General Aviation in 1952. The majority of tenants are businesses such as flying schools and at the airport. Retailers and other aviation related services with others including non-aviation business, private aviation enthusiasts and clubs. employees and students being based Ardmore Airport is primarily a training at Ardmore. For more information visit airfield and the majority of the pilots www.ardmoreairport.co.nz Airport provides a home for kiwi aviation businesses on the world stage. More than 600 people are employed businesses in and around Papakura benefit significantly through the Ardmore Cafe Situated on Harvard Lane is open 7 days 8.00am 4.00pm with views to the main runway for bookings phone 09 298 4846 NZ Warbirds at Ardmore Visitors Centre open 10.30am to 3.00pm Wednesdays, Saturdays and Sundays 511 Harvard Lane, Corner Harvard & McBride Lanes Ardmore Airport, Auckland 2582 www.ardmoreairport.co.nz Phone: 09 298 9207